PHARMANIAGA Bhd and Duopharma Biotech Bhd recently declared a bonus issue as interest in vaccine-related stocks waned as the delivery of Covid-19 vaccines turned out to be much slower than expected.

Pharmaniaga and Duopharma stock prices had fallen 35.7% and 34.9% respectively from peaking in August 2020, and a bonus issue tends to boost transaction liquidity and investor interest.

In contrast, Duopharma was down 3.4% to close at RM 2.81 last Friday, despite news of a one-for-three bonus issue and strong first quarter (1Q) earnings.

Since the start of the year, both counters have remained in negative territory, down from 14% to 16%.

An analyst attributes the weakness in Duopharma’s share price to the delay in closing its vaccine supply agreement at the end of May, which was announced before the proposed bonus issue.

Signing of the definitive deal has been postponed several times since it was first announced in January 2021. The analyst believes Duopharma will be able to sign the deal by June.

But time is running out, as Duopharma signed an agreement with Putrajaya earlier this year to deliver 6.4 million doses of the Russian Sputnik V vaccine within the year.

“There is a vaccine approval overshoot at Duopharma. Until this is approved, it is difficult to see a bonus issue having a positive impact on Duopharma shares. Technically, the bonus issue does not create any positive effect, but retailers appreciate it because the share price will become cheaper, ”another analyst told The Edge.

“The sentiment on the title still depends largely on the development of the vaccine, but its share price is well supported for the moment,” he adds.

While Duopharma’s valuation – the meter trades at a futures price-to-earnings ratio (PER) of 25 times – is relatively higher than Pharmaniaga’s 21 times, the analyst says the former will be very attractive if it may manufacture vaccines in the future.

“If Duopharma is not able to get approval for its vaccine, then Pharmaniaga will be more attractive,” he notes.

On an annual basis, he estimates that the vaccine could contribute about a tenth of Duopharma’s revenue.

Last month, the Minister for the Coordination of the National Covid-19 Vaccination Program, Khairy Jamaluddin, said vaccines such as Sputnik V and Cansino were still under evaluation by the National Drug Regulatory Agency and had not yet been registered.

As there is no indication of the arrival of Sputnik V in Malaysia, the first analyst points out that it remains to be seen whether Duopharma will be able to receive the 6.4 million doses by the 4th quarter. In addition, a growing number of countries have approved the Russian vaccine.

Despite the delay, Duopharma is expected to deliver improved performance this year due to stronger government demand.

“Demand has not returned to pre-pandemic levels, but it is encouraging to see strong results in the first quarter. Not only sales, but margins also increased due to cost savings. The quality of management is good, ”explains the analyst.

Recently, Putrajaya extended a contract for the supply and delivery of human insulin products by one year to December 2021, with an additional contract value of RM19.63 million. 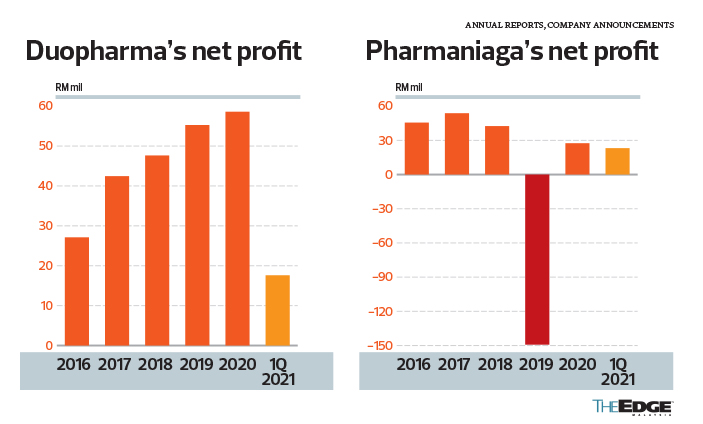 At the start of last year, the contractual period for the supply of pharmaceutical and / or non-pharmaceutical products to hospitals, clinics and others under the Malaysian government was also extended by 25 months until December 31, 2021.

Compared to Pharmaniaga, notes the first analyst, Duopharma has recorded stable profits over the years.

“This is why funds always prefer Duopharma in the long term,” he said.

As Duopharma’s share price has nearly doubled over the past year, he believes most of its future profits have already been incorporated.

“The contribution of 6.4 million doses will not be very large. It’s like a national service, they cannot overburden the government, ”he adds.

However, CGS-CIMB Research believes that Duopharma’s current valuations look attractive after the recent weakness in the share price, and has raised its call to “add” instead of “hold”, with a target price unchanged. from RM 3.67.

“Our price target is based on a CY22 PER of 28.8 times, where we take into account the prospects for potential long-term benefits from developing vaccine manufacturing capacity, which is a key catalyst for reassessment,” a- he said in a May 4 note.

As such, there is only one “buy” call on Duopharma against two “keep” and one “sell” recommendations, with a consensus target price of RM 3.15. This is an 11.3% rise from its closing price of RM2.83 last Thursday.

Compared to Pharmaniaga, Duopharma’s net debt was relatively lower, at RM171.3 million at the end of March 2021, with a debt ratio of 0.27 times.

Although large local funds such as the Employee Provident Fund (EPF) and Permodalan Nasional Bhd (PNB) have reduced their holdings in Duopharma, the first analyst is not too worried because their holdings are even higher than it is. six months ago.

“I think it’s more of a broad-based scenario. Not just Duopharma, other stocks were also affected by the sales activity. It was probably due to profit taking and not so much to the fundamentals of the business.

Duopharma owns and operates three manufacturing plants located in Klang, Bangi and Glenmarie, Selangor. It also has subsidiaries in the Philippines and Singapore.

Meanwhile, of the five analysts covering Pharmaniaga, two have “buy” calls, two have “hold” recommendations and one has a “sell” call, according to Bloomberg data. The target consensus price of RM4.07 for equity points has a downward bias of 2.4%.

In January of this year, Pharmaniaga announced that it had obtained 14 million doses of the vaccine from Chinese company Sinovac Life Sciences Co Ltd for distribution in Malaysia.

Previously, Datuk Seri Health Minister Dr Adham Baba said a total of 290,480 Sinovac vaccine vials bottled by Pharmaniaga would be used in vaccination centers across the country from May 11.

Overall, the two analysts believe that the vaccine distribution business would provide recurring revenue for pharmaceutical players, as multiple vaccinations may be needed – and on a recurring basis – even after herd immunity, one of the analysts arguing that the segment will generate an after-tax profit. 10% to 15% margin.

The government hopes to achieve immunity for the herd – or 80% of the vaccinated population – by the end of 2021, but health experts say the target is extremely ambitious given the rapid rollout of the vaccination program.